Showing posts from May, 2020
Show all

Honors (Kennedy Center) – The New Yorker (1982) A movable feast of parties, testimonials, and live entertainment which celebrates the careers of five distinguished Americans in the  performing  arts ­ this year they were George Abbott, Lillian Gish, Eugene Ormandy, Benny Goodman, and Gene  Kelly Lillian Gish (left) Mr. Ronald Reagan and Mrs. Nancy Reagan 1982 – Kennedy Center CARY GRANT gets stagefright, Benny Goodman is absent minded. George Abbott’s favorite song, now that he has directed ninety ­ nine plays and musicals, is “Falling in Love with Love,” from “The Boys from Syracuse.” Secretary of State George Shultz sports a red satin Marine dress cummerbund with his dinner jacket, because he used to be a Marine. Eddie Albert was trained in classical music at the Cincinnati Conservatory and is a Wagnerian – opera buff. Lillian Gish is an old friend of Nancy Reagan’s mother, and invited our First Lady to dinner frequently when Mrs. Reagan was a struggling young actress in New York. Ge
Post a Comment
Read more

The Price They Paid for Stardom – By Myrtle West (Photoplay Nov. 1926) 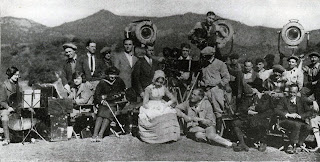 The Price They Paid for Stardom – By Myrtle West (Photoplay Nov. 1926) Photoplay November 1926 Vol. XXX Number Six The Price They Paid for Stardom By Myrtle West Do they profit by their popularity—or are they victims of fate? Irving G. Thalberg, Lillian Gish, Louis B. Mayer 1926   WouId you want to be a star—If you knew that you never could laugh? If you had to go through life with cross-eyes? If it cost you the love of your husband or wife ? If you might have to pay for fame with your life ? Oddly enough, Lillian Gish’s regime is like Mae Murray’s. Lillian has less real fun than any girl in the world. Although somewhere around the age of thirty, Lillian is constantly chaperoned. Lillian’s public demands a nun like idol. And Lillian lives up to this ideal with amazing consistency.   Lillian cannot marry. No one wants to think of her as a domestic little wife. George Jean Nathan and Lillian Gish at Chateau Du Plessis – France 1922 Lillian cannot eat in public; she might spoil the illusi
Post a Comment
Read more
More posts