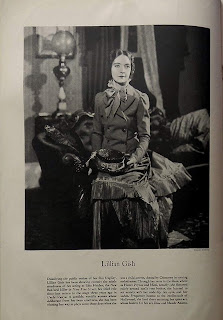 Dissolving the public notion of her film fragility, Lillian Gish has been showing recently the subtle sturdiness of her acting as Effie Holden, the New Bedford killer in Nine Pine Street, her third role since her return to the stage three years ago in Uncle Vanya. A sensible, worldly woman whose deliberate front has been aloofness, she has been winning her way in plays since those days when she was a child actress, chased by Chinamen in touring melodramas. Through her years in the films, where as Hester Prynne and Mimi, notably she fluttered palely around sunlit rose bushes, she learned to act acutely with her underlip, her eyes, and her lashes. Frequently hostess to the intellectuals of Hollywood, she lived there maturing her quiet art, whose leaders for her are Duse and Maude Adams.