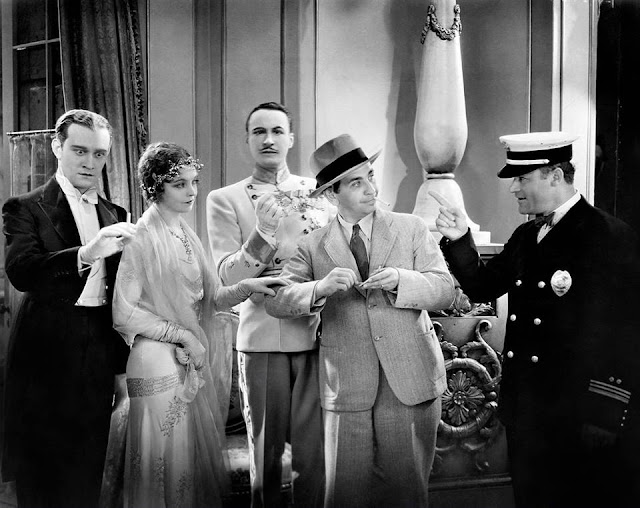 By Edwin and Eliza Shallert

LILLIAN GISH is putting her foot down on simpish heroines. She simply won’t look at the role of a wronged little girl in the future. She is also going to disdain the canary birds and doves which have been her companions in so many productions. And she will decline herself to flutter while acting.

All this has come about through her entrance into the talkie arena. Lillian is appearing in “The Swan” for United Artists. Initial tests of her voice are reported most roseate. It is predicted that she will actually be a transformed person. Lillian is undoubtedly one of the screen’s ablest actresses, but her technique, a heritage from the old Griffith days, grew undeniably old-fashioned.

The box-office showed it in the reception of some of her last silent pictures. She has her chance now to reinstate herself as the beauteous and romantic princess of “The Swan,” and there are doubtless a large proportion of filmgoers who will heartily welcome the resumption of her career in this new phase.


What The Fans Think

The Gish Artillery Opens Up.

After reading the prejudiced tirade from Florence Bogarte, Logansport, Indiana, regarding Lillian Gish as an artist, I feel that I must write and ask why such a reliable magazine as Picture Play should publish letters of this type.
A first glance should convince one that these writers are wholly incapable of fair criticism, whether they be teachers of dramatic art, village librarians, or presidents of the women’s leagues for the prevention of floods in the Mississippi Valley. By ignorance I mean the lack of such qualities as tolerance, good breeding, and a feeling for things beautiful and just, more than the mere school-book fare which many people imagine comprises knowledge.
Living in Philadelphia and in New York, I believe I have many more and varied opportunities for comparison and first-hand information regarding the screen and theater than people living in the smaller towns. A consensus of opinion of intelligent people should suffice in the declaration that Lillian Gish is a great artist—perhaps, as many hold, the greatest artist the screen has yet produced.
The courage and loveliness, the wistful smile that defines the beauty of all the universe, the thousand fleeting lights and shadows of emotion which Lillian Gish brings to the screen is art, and cannot be put aside -with statements such as, “She has no technique, no artistry, and does not know the A B C of dramatic art.” This and other statements such as, “She is about the most mediocre actress we have on the screen,” are really pathetic, because they so clearly and so surely hold the writer up to «be misguided and poorly informed.
How much finer and bigger -it is, when we are not fitted to judge, to sit back and listen attentively to people who by long years of training are qualified to speak. Men such as Griffith, Reinhardt, Henry King, and Victor Seastrom, mellowed by years of experience and a wealth of knowledge which we, including teachers of dramatic art, couldn’t possibly possess, declare Gish alone and unchallenged in her field of tragic beauty. The beacons of their judgment burn to dust the feeble little scrawls so egotistically filled with stupid, prejudiced criticisms.
Lillian Gish is an actress of unquestioned artistry, and if personal feeling for the beautiful is not big enough to grasp it, then don’t lay the blame at the door of Gish. Fortunate are the people who appreciate and live within the radiance of her interpretations. But if you don’t, then light the candle of your admiration before your favorite. Don’t waste and squander your imagination on vulgar, ignorant statements.
C. Basil Clunk.
1519 North Gratz Street, Philadelphia, Pennsylvania.