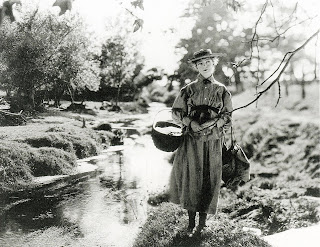 “A Romance of Happy Valley”

David Wark Griffith’s “A Romance of Happy Valley,” (Artcraft), starts with the charm of an idyll and lapses into the most insane melodramatic clap-trap. Here is the soul struggle of a little country boy who finally tears himself away from his little sweetheart and his parents to find himself in the city. Finally he returns, his pockets bulging with money. His father, now penniless and facing eviction, does not recognize him when he comes to the old homestead to stay. That night the old man tries to kill the stranger in order to get his money, but chance prevents the tragedy. It seems that the village bank has been robbed and the posse has pursued the cracksman to the homestead. The boy, attracted by the noise, goes out to investigate just as the wounded bank robber crawls into his room. So the old man chokes the thief to death instead of his son. Consequently, everything ends happily, except for the burglar.

“A Romance of Happy Valley” is Griffith briefly at his best and extendedly at his worst. He seems unable to get out of the slough of the melodramatic punch and the chase. The early portion of the picture, despite exaggeration of rural characters, has many fine moments, such as the little love scene in the corn field between the boy and his sweetheart. But, in the main, “A Romance of Happy Valley” is pretty inferior stuff.

Lillian Gish plays the country sweetheart, Griffith continuing in his efforts to make the most idyllistic girl on the silver screen into an eccentric comedienne. Robert Harron varies as the country boy and George Fawcett completely overdoes the old father. Fawcett is guilty of celluloid ranting in the moments when he fights with his conscience before attempting to kill a stranger within his gates.