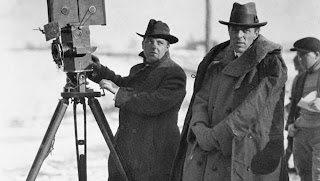 “What a World We Live In”

Going to see Lillian Gish isn’t just another interview with a popular star. It is a privilege and a rare pleasure. For she is the heart-breaking  girl of Broken Blossoms—the screen’s greatest actress, in my opinion. She is a tragedienne with power to evoke beauty by means of tenderness, pity, and a quality of glamour that defies all analysis. Her genius, as understood and developed by Griffith, stands as our best assurance that motion pictures are a new art, not merely an industry. And in saying this, I do not overlook the contribution made by Charlie Chaplin. He is very great. But tragedy, inevitably, is more lofty than farce. He would be the first to admit it.

When I went up to Lillian Gish’s suite at the Ambassador, do you know what I found her doing? In a mood of wondering delight, she was playing with her first radio set, a portable contrivance finished to resemble a suitcase, which she had placed on a chair beside an open window. “Ah, Mr. Roberts ! Look at this, listen to it !” she cried. “Voices from the air. Sounds and music that have always been about us, but that we’ve only just learned how to hear. What a world we live in !”

She sat down then on a divan, her hands crossed in her lap, like an exquisite child, and we talked of the magic kingdom of art. One of the most admirable things about her is the complete sincerity with which she takes her work. She would never lend herself to the making of a picture that pretended to be what it was not.

The scene of Romola, for instance, is in Florence at the height of the Renaissance, and had it been asked of her she would have refused to do the film with sets fabricated in a Hollywood studio. “It’s possible to reproduce an old street, or to build a seemingly perfect copy of a palace where men and women have loved and died, and yet fail utterly to capture the spirit of the place,” she says. “The very stones of Florence have individuality. The sun shines there, and the rain falls, thru an atmosphere tinted otherwise than ours. The human throng moves to a different rhythm.” She told me she had dreamed for years of making The White Sister, for the sake of the scene in which she takes the veil as the bride of Christ. The initiation of a nun is literally a wedding, a mystic ceremony of great beauty.
As Miss Gish shows it, no detail is faked. She steeped herself in the ritual before she was willing to use it as an actress. And she declined to give the picture the conventional happy ending that would have meant having the nun escape from her vows and marry the lover who had lost her thru no fault of his own. It would have cheapened the whole conception, she says.

Miss Gish is now planning to do Charpentier’s opera Louise as a motion picture. Final arrangements have not been made, but if the project goes thru the public has an artistic treat in store for it. You see, Paris—the real Paris of poets arid artists—has never been portrayed on the screen except in the most faky manner. Louise is the masterpiece that furnishes the best pictorial opportunities, and with Lillian Gish as the heroine we may be sure that none of its poignancy will be lost. It will gain, in fact. She will add to it her own incomparable charm.

Think of Lillian Gish, and immediately one thinks of D.W. Griffith, too. But it happens the story I have to tell about him this time does not relate to her, or to any of the stars he has made famous. Nor will it show him as the great producer. It has to do with Susie. Pretty soon now, Susie is going to be a public character. This is your first chance to meet her. I was talking to Mr. Griffith at his Mamaroneck studio, shortly after his return from Germany. He was allowing himself to be coaxed into giving me advance tips on the picture for which he made all the exteriors abroad last summer. Suddenly he turned, smiling to me. “How would you like to meet the only German actress I brought back?” he asked. There hadn’t been a word in the newspapers about his bringing back a German actress. “I’d like it very much,” I answered, astonished and pleased. “But she doesn’t speak English,” he warned me. With an odd gesture familiar to those who know him, he draped a plaid overcoat on his shoulders like a cape, put on his hat at any old angle, and started for the back yard. I really thought I was on my way to be introduced to some blonde Gertrude or Gretchen taking the air eccentrically in the midst of garden truck and hay. As we crossed the yard. Griffith gave me a quizzical side glance, chuckled at his little joke, and boomed:
“She’s a hen.”
And that was the plain truth. Susie is a Plymouth-Rock hen from a village near Berlin. Fate brought her into some shots made of a humble homestead, and it was clear from the beginning that she was no ordinary fowl. She was friendly and intelligent, would stay put on location, could even be made to act. At the slightest encouragement, she threw up her head and sang lustily. It wasn’t just cackling with her. Her merry voice rang tunefully all day. She was that rare bird, a “crowing hen,” as British and New England country folk say. But Griffith prefers to call her a singing hen. He used her in a number of scenes, and then decided he would need her on this side of the ocean. He offered to buy her for a sum that seemed huge in German marks. Her owners almost wept. They were sadly tempted, yet would not agree to sell. Everyone in the family was absolutely devoted to Susie. So this is the charming compromise that Griffith made: He hired Susie at a monthly salary, and promised that as soon as the picture was finished he would ship her back to Germany in state, in the same coop that had been built for her westward voyage. I met her after nightfall, and like all chickens she was bewildered at being hailed from her roost into artificial light. But when her director, “D. W.” himself, bent down and spoke to her, she put her head knowingly on one side and sang.
Watch out for the professional debut of Susie.
You’ll find her a wonder.