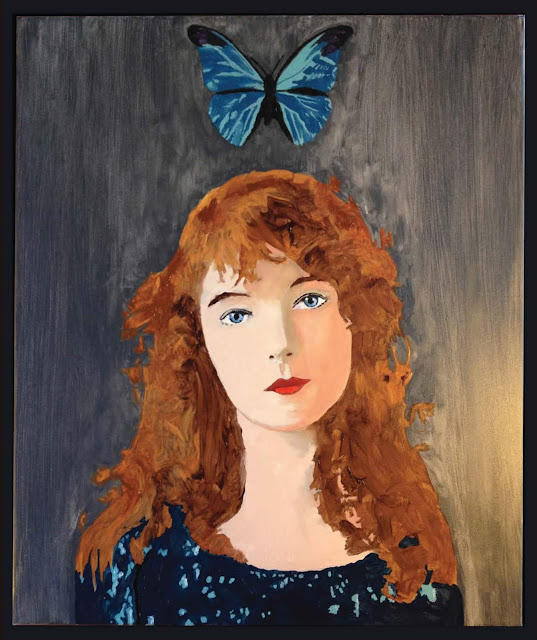 My Pulchrist Experiment in Verisimilitude

Having lived as an experimental ‘artist-at-large’ for the past two decades, I took it upon myself to try my hand at representative oil painting this year. I moved to Florence, Italy, in December, 2012, because I wanted to see how renaissance painters created Beauty on canvas.
What I found was that far from being hyperrealist in the execution of their paintings, the Old Masters simply attempted to create Beauty in as realistic a way as was possible. Trompe l’oeil was and is a niche technique. The unitiated often fetishise hyperverisimilitude, believing it to possess the greatest intrin­sic artistic value. But my goal is to create Beauty. I’ve even created my own art movement which I call Pulchrism. So I attempted realism in painting this year merely as a potential vehicle for Beauty.
Drawn somewhat unconsciously to silent movie imagery, I began this quest with a still image capture from an old movie, interpreting its general form into my Sacred Hermaphrodite diety 5=6 who descends onto Florence’s Via del Moro.
From there I pursued more realistic body contouring with Suffrage and Beauty Disarming Love, learning about background detailing along the way.

Finding a beautiful head shot of silent movie actress Lilian Gish on the Inter­net, I was inspired to recreate a version of her in oil paint. I fell in love with her at first sight, and therefore had to name her Galatea.

When the summer came to Florence I decided it was time to migrate to my air-conditioned apartment in New York City’s Bowery District. There I paint­ed Cascading Orchids as a still life practice exercise in preparation for Butterfly Goddess – a much larger, more complex work. I soon after completed Unicorn Purifying Water, an accomplished work in my estimation, one inspired by an exhibition of unicorn imagery at the Cloisters in northern Manhattan.
After spending a month in Japan seeking out Shinto shrines and Japanese Art Nouveau, I finally returned to the UK and ventured to recreate hothouse flowers in Pitcher Plants.
Having a strong desire to make large canvases depicting beautiful butterflies, I endeavored to reproduce the extraordinary colour of the Madagascan Sunset Moth in my last painting of the year.

“The image reminds of me the intents of the pre-Raphaelite… perhaps its emphasis on simplicity and purity.”
– Liliana Leopardi, Art Historian, Hobart and William Smith Colleges
Galatea gazes lovingly upon Pygmalion as she completes her metamorphosis. A torrential rain cascades down while a Morpho butterfly hovers above an­nouncing the event.
Inspired by Louis Gauffier’s depiction of Galatea at the Manchester Art Gal­lery, and modelled after a famous portrait of the silent movie actress Lillian Gish, Jesse Waugh’s Galatea is the first fully Pulchrist work of painting, em­bodying all of the tenets of Pulchrism, the art movement advocating Beauty in the arts.