September 30, 2018
The 10-foot mural along state Route 21 was removed last month so the building can be repaired.
MASSILLON Text messages and phone calls from friends weren’t enough to make Scot Phillips believe that a mural he painted years ago on a city building had somehow vanished.
The artwork depicting Lillian Gish — whose acting career in the early 1900s spanned silent films, radio and later television in 1948 — is significant to Massillon because of her visits here between filming. Surely, it couldn’t be gone.
To Phillips, an artist and the Massillon Museum’s operations officer, the mural holds special meaning. It was his first. And it helped launch a succession of other jobs painting murals.
He had to see for himself.
Phillips drove south on state Route 21 off Lillian Gish Boulevard SW. He could see the city’s pump station building. On the north side, a man had been using a pressure washer to clean the walls.
Phillips was stunned. His friends weren’t kidding.
The 10-foot mural depicting Lillian Gish in the 1926 film “The Scarlet Letter” — a familiar sight to passing motorists for the last seven years — had been wiped clean.
“I don’t usually get emotional, but it does upset me that it is gone,” he said.
What happened?
Mayor Kathy Catazaro-Perry said the building had fallen into disrepair. The director of the wastewater management plant met with the U.S. Army Corps of Engineers Tuesday afternoon to address concerns with the structure and find the next best course of action, she said.
The Lillian Gish mural was stripped from the pump station on June 2 to ready the building for examination and needed repairs.
A Massillon Tigers mural remains on a pump station at the west end of Federal Avenue along Route 21. While that pump station also has some damage, it is unclear if the Tigers mural will need to be removed down the road.
Though city officials could not specify what’s wrong with the building until the evaluation is finished, Catazaro-Perry said, she hopes to have the Gish mural repainted after the building is restored.
“I know we all love the murals that are painted all around town, and we do anticipate it coming back as soon as we fix the infrastructure of the station,” she said.
Tourist attractions
The city’s mural project — an effort to help define Massillon and draw visitors by installing meaningful artwork on various buildings — was the vision of former mayor Frank Cicchinelli. He commissioned the paintings before Catazaro-Perry was elected to office in 2011.
The Senior Citizens Center on Lincoln Way W was the first building to get one, Cicchinelli said. The city has (or had) at least four large murals and a few smaller ones, including the recently removed Lillian Gish design and Obie the Tiger — the Massillon City Schools’ mascot.
“The (murals) really were tourist attractions, and I would hope the city would continue that same trend,” Cicchinelli said. “People would come through Massillon and see the murals. Sometimes they would stop and take pictures of the murals.”
Work on the Gish piece, which encompassed three sides of the pump station, began in November 2010, with the finishing touches completed in late August the following year. Since then, Phillips has done at least 16 other wall paintings, including jobs in Akron and Kent.
He doesn’t blame the city for the demise of the Gish mural.
“It was amazing,” Phillips said. “I hadn’t painted a mural before. It launched my mural-making career. It’s unfortunate, but I understand it had to happen. There was really no other course of action.”
Before putting the paint on the building, Phillips said, he used pencil to draw his vision on the wall surface. He was not paid but received $3,000 from the city for
paint and other supplies. Phillips said he spent an additional $1,000 of his own money to complete both the Gish and the Obie murals.
More murals
Currently, Phillips is working on a piece in downtown Canton at Cleveland Avenue NW and Fifth Street NW that will depict a football scene of the rivalry between the McKinley Bulldogs and Massillon Tigers.
“I think it was just one of those things that had to be taken care of quickly,” he said of the building where the Gish mural once took passersby back to another time. “I understand it’s a problem that the city had to deal with.”
The Gish mural was the most recognized among Phillips’ work, he said, because of its location along Route 21. People traveling between cities or states saw it as a landmark announcing that they have arrived in Massillon.
After the necessary repairs are made, Phillips said, he hopes he can reproduce the Gish art in the same location. However, he has been brainstorming other locations if the building’s condition is not fit for the painting.
The pump station has water behind the concrete walls, which could decrease a mural’s life span due to moisture, Phillips said, noting the paint he uses is guaranteed to last at least 20 years.
“If those can’t live on” he said, “I’d love to do something else in downtown Massillon somewhere.” 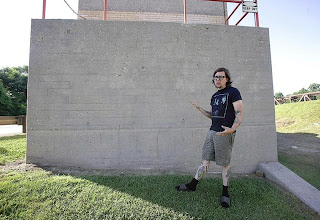 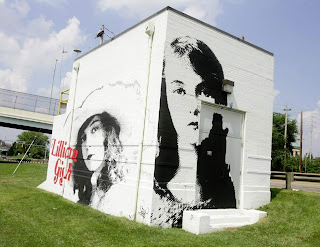 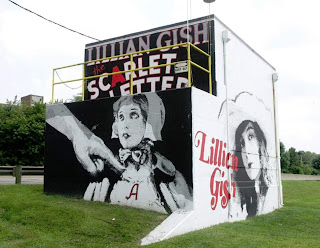