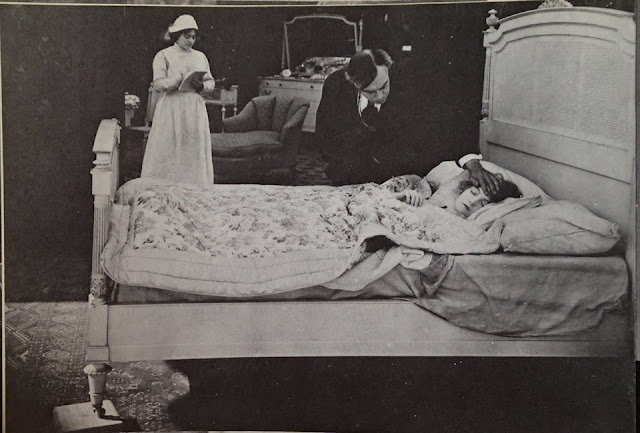 Artistry Is Keynote of Triangle-Fine Arts Drama.
Reviewed by Thomas C. Kennedy
Artistically, “An Innocent Magdalene” is distinctly worth while. This is something which simply cannot be said about the averagely good offerings. “An Innocent Magdalene” is far better than what is accepted as good, and this despite the fact that it contains not a single sensational melodramatic moment in its entire make-up.

The story is laid in the South and its plot is simple, quite so. It is the story of a girl whose love for a stranger to her town, which is in fact the Universe as far as her opportunities to reach out are concerned, is all powerful. She is so dominated by this affection that she leaves her aristocratic father who continually boasts of his ancestry and decries a social standard which holds that men are born equal and deserve equal opportunity. The man Dorothy marries is worthy of her love. He proves it when he casts aside his former mode of living, which included gambling on a basis which put him outside the law. Sentenced to a year in prison, Forbes leaves his little wife with assurance that happiness will be theirs after he returns. During his absence a woman calls upon Dorothy and emphatically states that she is the legal wife. The stunned Dorothy, who is soon to become a mother, returns to her father’s home. He orders her out and she is subject to the insults of the people of the town. Forbes returns to his home and on finding the woman there, tells her that past follies cannot interfere with his happiness now, and advises her to return to her husband. He then travels to Norwalk and is reunited with Dorothy.

The characters, all of them, are deftly drawn. The narrow father, who lives in the past, the gambler and Dorothy in whom the instincts of true womanhood flourish, are strikingly human.
It is an appealing story and the treatment is nothing if it is not delicate and artistic. Allan Dwan had a splendidly constructed scenario to work from and an intelligent cast to work with. The director himself rose to the occasion and the result is “An Innocent Magdalene,” a picture of rare charm. It is a picture which creates and sustains a real and artistic illusion. Roy Sumerville wrote the scenario from the story by Granville Warwick. Lillian Gish probably never had better opportunities and probably for that very reason never gave such an impressive characteri ation, and she along with Sam de Grasse and Spottiswoode Aitken and others in the casl compels admiration. One is tempted to insert words of thanks into the flow of praise her performance in this picture honestly merits. Some day pictures such as this will be the rule more than the exception. That day cannot come too soon.