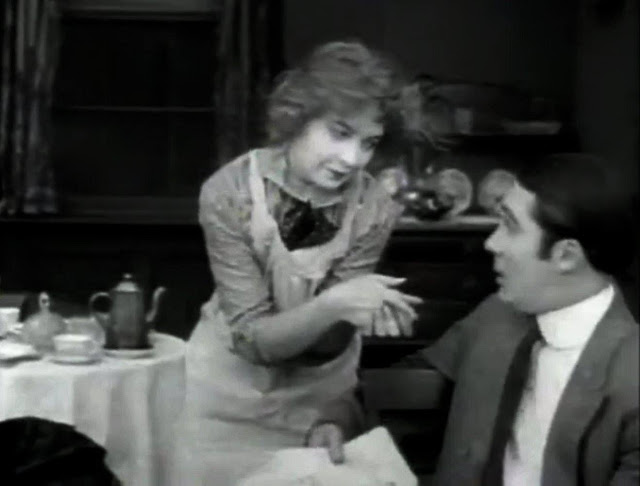 The New York Dramatic Mirror, Vol. 70, No. 1803 (July 9, 1913)
When it was announced some weeks ago that the Biograph Company would release a photodrama of two-reel length a considerable stir of pleasant anticipation was experienced among those interested in the Licensed pictures. The Biograph Company has long had the enviable reputation of doing things well, and it has, at least, lived up to the reputation with The Mothering Heart. After due reflection we are convinced that it is one of the most notable productions, from an artistic standpoint, the Biograph Company has made. Lillian Gish, as the little mother, while showing extreme youth, interprets her part with pleasing taste and remarkable intelligence.

There are moments when the pose which she is caused to assume seems to bear out too plainly a conscious purpose on her part. Some of her attitudes of a blank, unseeing nature when the heart is torn with grief, seem to be held a bit too long for the best effect. But she has sincerity and, altogether, she is charming. Walter Miller in the role of the young husband, who is led astray only to repent, and return because of parenthood properly realized, exhibits a splendid personality all his own, which is saying much when we consider the present tendency among some picture players to copy one another.

The basic theme is not wholly new to us; we have seen it handled before in divers ways, but in such a scene as we have at the close of this picture where the two estranged parents lean over the crib where lies the cold form of the baby, we have another evidence of the Biograph’s ability to successfully manage a most delicate situation. For the girl to have accepted the man back on his first show of repentance would have been disastrous; but the need of him and his full regeneration are clearly shown in the final working out. It is note-worthy that all the principal scenes in the picture are done close up to the camera, and some of the photographic coloring is beautiful. Particularly is this true of the scene, ’’The New Light. ” One of the most remarkable scenes we have seen for atmosphere and completeness of detail is the cabaret cafe. It is a picture that grows upon one with reflection.
–G. in The New York Dramatic Mirror, Vol. 70, No. 1803 (July 9, 1913), page 28.

The film opens by showing a young woman (Lillian Gish) in a garden. She is tender hearted, demonstrated by her appreciation of the flowers and the rescuing of a puppy. A melancholic young man (Walter Miller) woos her and she is foolishly swayed more by his pain of rejection than her love for him and eventually agrees to marry. Later in their new home together she takes in washing to help support them when her new husband has little income. Things change when he finds some success in a well paid job. He insists they celebrate at a restaurant where there is an Apache dance cabaret. He wears a new suit but she her plain street clothes. Her husband’s eye is caught by a sophisticated single woman (Viola Barry) at the next table.

Later, encouraged by the woman, the husband begins to deceive his wife and have clandestine meetings with her. She is rich and has a chauffeur-driven car at her disposal. The wife, now pregnant, as evidenced by her interest in baby clothes, discovers a glove in her husband’s coat pocket. She follows him and uncovers his deceit. After confronting her husband she leaves him and returns to the home of her mother (played by Kate Bruce) where the baby is born. We now see the husband being dropped by the sophisticated woman for a new richer male companion (Charles West). The dejected husband sitting alone at home receives a letter from the wife telling him of the birth. He resolves to make it up with her. We learn next that the baby has becomes ill and is attended by a doctor (Adolph Lestina). The husband arrives at the wife’s mother’s house and she allows him to see the wife and child.

However the wife wants none of him and angrily rejects him. While the husband sits dejected in the garden the baby dies. The wife vents her anger on the bushes in the part of the garden in which the film opened. She returns to find her husband bent in grief over the crib. He is tenderly holding the baby’s dummy. Their hands touch and the husband sees she is still wearing her wedding ring. They are reunited in an embrace and the film ends.