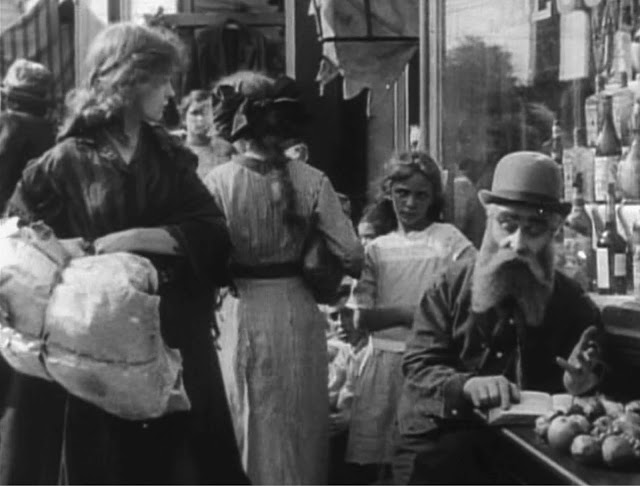 THE MUSKETEERS OF PIG ALLEY

The New York Dramatic Mirror, Vol. 68, No. 1769 (November 13, 1912)
As a drama of slum life on the lower East Side of New York this picture is remarkably impressive. The street scenes and those laid in the ominous looking Pig Alley carry the touch of reality, and the characters of the Little Lady, the musicians and the gangsters are well played. The Little Lady and the musician are lovers, but he is poor and goes away to earn more money. While he is absent the girl is insulted by Snapper Kid, the leader of the gang, and being a high-spirited young woman she resents the insult.

Later she goes to a gangsters’ ball, and it is Snapper Kid who saves the girl from the clutches of a designing young man. This starts a gang war. Meanwhile the musician has returned and been robbed of a pocketful of money by the same Snapper Kid. How the musician and the girl finally befriend the young gangster and save him from the police after Pig Alley has been ’’shot up” provides a fitting climax for an interesting tale.
–D. in The New York Dramatic Mirror, Vol. 68, No. 1769 (No- vember 13, 1912), page 30.