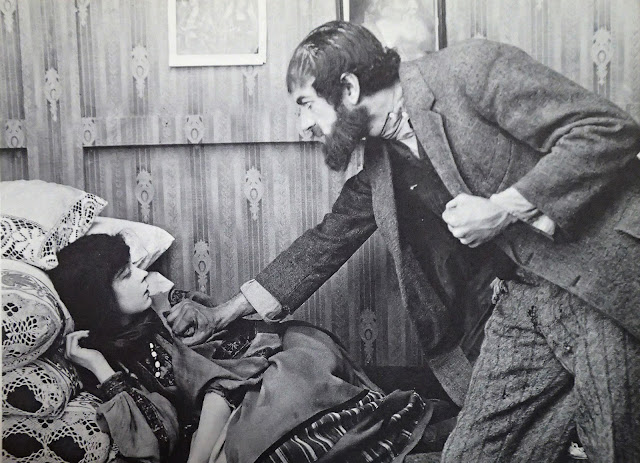 LILLIAN GISH’S characterization of a Russian peasant girl and the atmosphere and pictorial beauty of the scenes are more impressive than the story which “Sold for Marriage” tells. It is a sympathetic romance in which the aunt and uncle of Marfa deem it their duty to sell their pretty charge at a good price. The play is carried by Miss Gish in the central role and the striking effects supplied by the director, William Christy Cabanne.

“Sold for Marriage” is a picture that will find favor generally. The story is thin but it serves as a vehicle for the featured player and the basis for the production of many beautiful pictures. The scenario is by William E. Wing, who has succeeded in making five reels out of a play that could in reality by depicted in much less footage. This is admirably, skilfully done, and “Sold for Marriage” holds the interest unflaggingly. The ending is commonplace, but it is the only thing which one can find fault so it can be forgiven.

Miss Gish’s portrayal of Marfa wins her the sympathy of the audience, she assumes the role of a Russian peasant in a thoroughly convincing manner. Just why Miss Gish impresses one as an actress of great skill and little warmth is indeed a question, but the fact that her work seems to lack natural color and spirit remains. In fairness to her we must insist again that her characterization is technically beyond criticism, and it is not at all unlikely that others will experience the natural warmth and sincerity we missed.

Marfa’s affection for Jan, a young Russian who has recently returned from America, makes her rebellious when her guardians try to sell her to an elderly man who is ready to pay them a good price for the pretty child in marriage. The bachelor marries a girl who is less independent and Marfa comes in for abuse at the hands of her uncle and aunt.

Marfa’s actions toward the new governor who is attracted by her beauty make it necessary for the girl and her guardians to flee to America. On the boat they meet Jan; consequently Marfa’s love grows stronger. But on arriving here the aunt and uncle contrive to separate the happy couple. Marfa is about to be forced into a marriage with an ugly Russian when Jan calls in the police, who have determined to put a stop to the sale of Russian girls for marriage. Frank Bennett is a very good type for his role as Jan, but Jan as played by him is not an especially manly man. A. D. Sears, Walter Long, Pearl Elmore, William E. Lowery and the other members of the cast are convincing in appearance. The snow scenes and those which show a severe storm in progress are highly successful in the effect they produce upon the spectator.
Thomas C. Kennedy – April 15, 1916